Another fine performance from Muscliff's girls football team who came away with a fantastic 3-1 win against St Mark's. What a fantastic year of football you've had! You go girls!

We were delighted with Muscliff's swimming team performance today at a gala hosted by BCS. A shout out to all swimmers for some great times and massive congratulations to Eliza and Will for their 1st place finishes.

A fantastic day was had by children in an outdoors event hosted by Rockley Watersports at Poole Park. Children participated in a range of land and water activities and we couldn't have wished for better weather. Adults were so impressed by the children's attitudes: there was no hesitation in responding to the group leaders' instructions and they were keen to get stuck into every activity. It was so much fun - we only wished we could have taken more children! 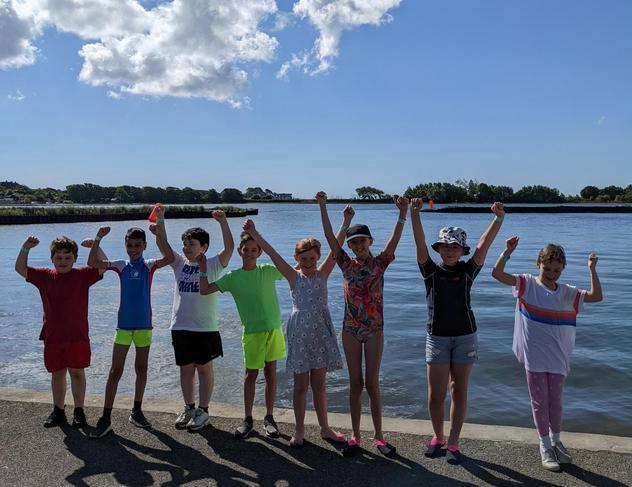 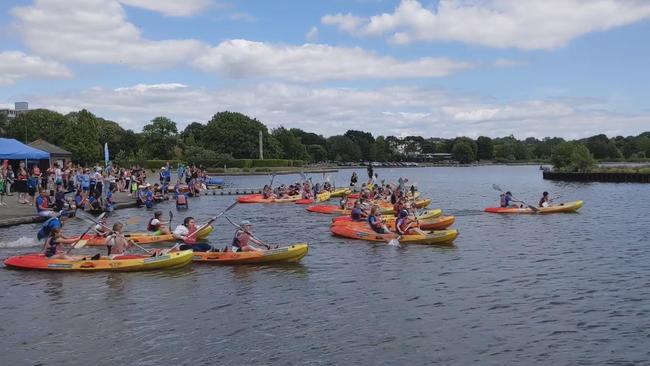 Muscliff football girls had a convincing away win over Winton Primary with a final score at the whistle of 5-0. Well done team - all that training is paying off!

Children made a trip to Southbourne Tennis Club this week for an inclusive tennis event run by coaches the club and students from St Peter's. They participated in a range of activities collecting points at each station for their school. When the results were read out, children celebrated in finishing 2nd place! Miss Fisher was most impressed by children's passion and partnerships encouraging each other to do their best. The medal from this event was awarded to Poppy for her enthusiasm in trying something new. Key value: Kindness. 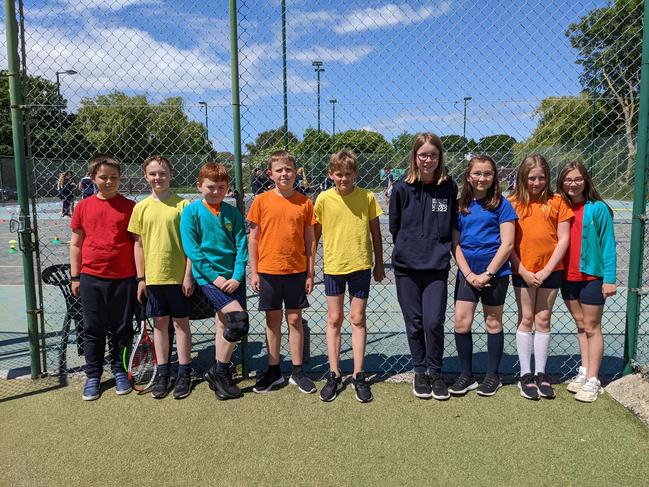 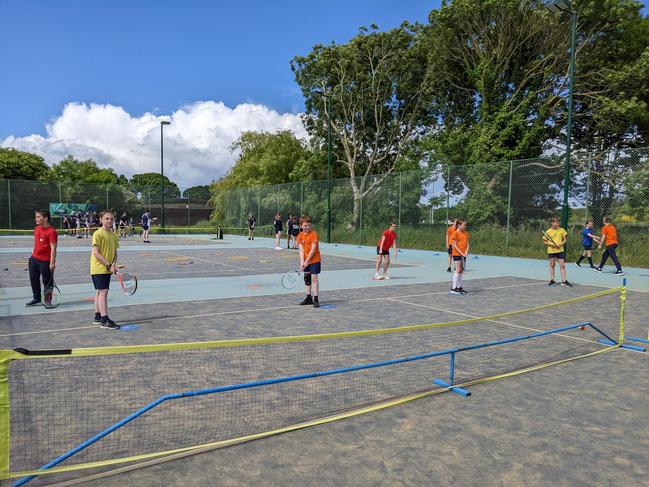 Today, Muscliff entered their first ever Handball team into an event held at Winton Primary. Without a handball club at school, children in Y6 decided in the autumn term to teach themselves how to play at play and lunch times! There were lots of very competitive matches and Muscliff narrowly lost to the eventual winners 6-5 in the group stages. Teachers from other schools commended Muscliff on their passing and teamwork. In a difficult decision, it was captain Myah who earned player of the tournament for her positive energy and fair play. Well done team! Key value: Resilience.

The Year 6 athletics team competed this week against 13 other schools and they were INCREDIBLE in finishing in 5th place overall! The girls team were pipped into 2nd place with a total of 793 points, just 15 points behind the winners. Out of the four events, Miss Fisher was most impressed by the 600m race where all children gave it everything, some even having enough left for a sprint finish. Winning boy & girl: Frankie and Isabella. Medal for her passion and teamwork awarded to Sophia. School value: Aspiration.

Today, a group of Y4 children participated in a 'This Girl Can' event at Talbot Heath School where they experienced 4 different sports: cricket, tennis, football and multi-skills. The group were extremely excited to be representing Muscliff and it was lovely to see their passion for sport develop further during the day. These girls certainly can! School value: Curiosity. 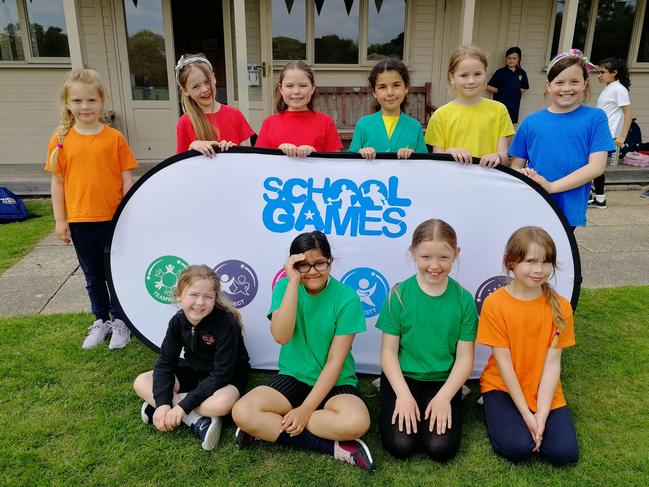 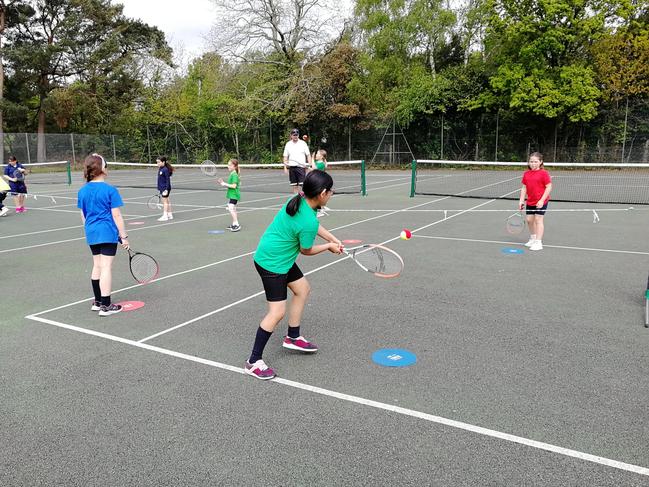 It's the first week of the summer term and children are already warming up for Wimbledon! Well, not quite but Year 4 went to Victoria Avenue Tennis Club to take part in Bournemouth Schools Tennis Festival. They had lots of fun and showed off many skills learnt at tennis club in school with Will Bound. Well done everyone - you did Muscliff proud! 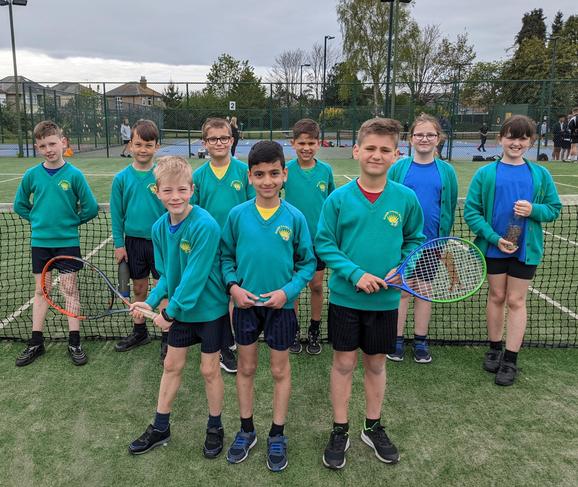 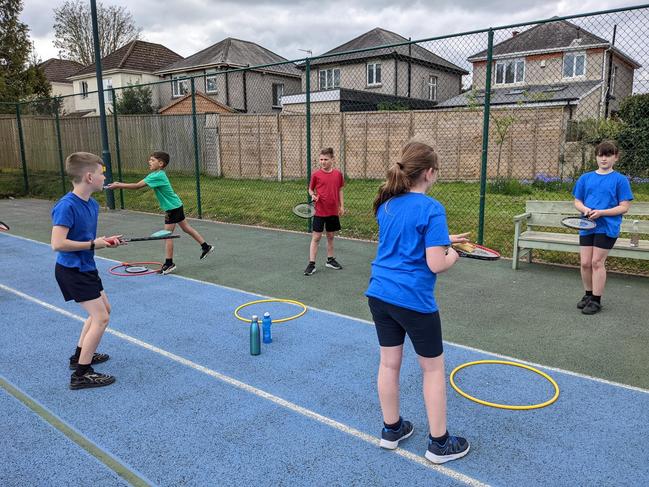 Miss Patrick was extremely proud of the Year 4 and 5 children who attended a full day of sporting events at The Grange School in Christchurch. The children showed fantastic determination whilst enjoying a range of activities, many of which they had never done before. They started the day learning the sport of curling and completing a crazy-golf course before using lots of energy taking part in hurdles and speed bounce. In the afternoon, children participated in a table cricket competition where they showed excellent team work both with their peers and children from other schools. 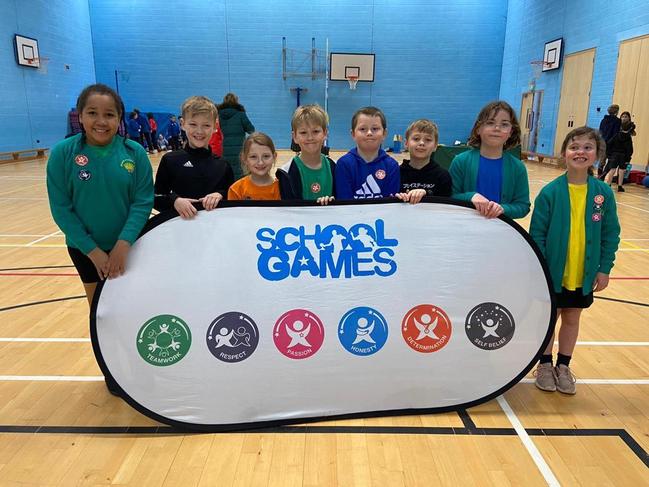 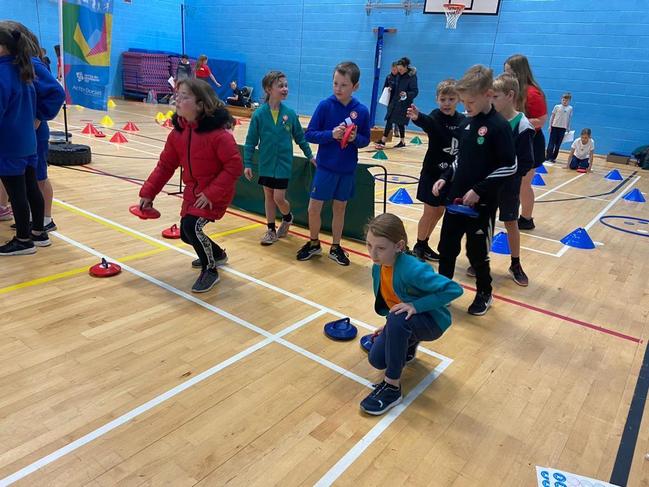 After the disappointment of a Tri-Golf event being rained off earlier in the month, children from Year 4 were delighted to get the opportunity to represent the school at a multi-skills event at St Peter’s. Children had lots of fun taking part in the various activities run by the exceptional Year 9 Sports Leaders. As ever, Muscliff pupils did the school proud showing impeccable behaviour and a great sporting attitude. 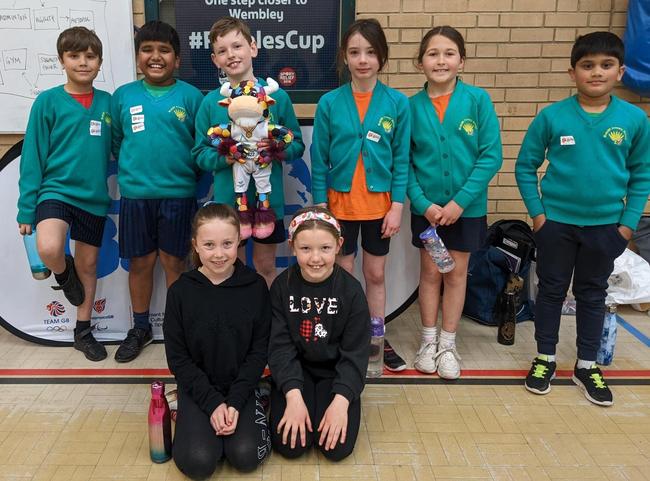 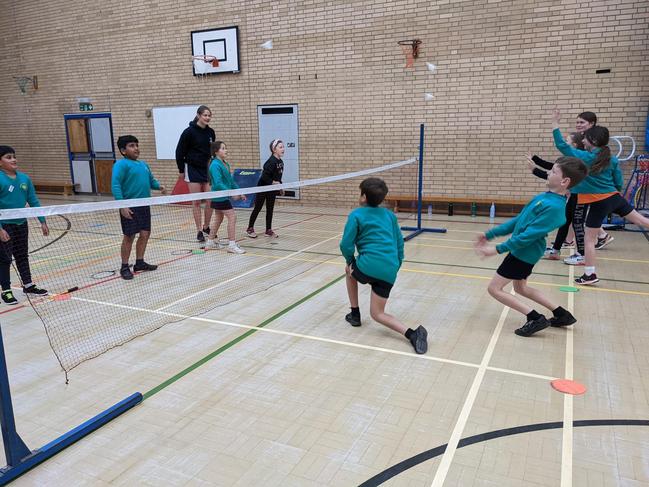 In the last of the netball dates this season, a team represented Muscliff at local sports centre, Sir David English. They developed their skills through different practises before playing some friendly matches against other schools winning 2 out of 3. A superb end to  the season!

What fun we've had today! Whilst much needed support and donations were collected across the school for 'Ukrainian Day' , 15 red noses were bought locally in support of Red Nose Day. The Red-Nose-and-Spoon race course was set up first thing in the morning and classes took turns in competing against each other to be crowned champion! Well done to everyone who took part - great manoeuvring and balancing! 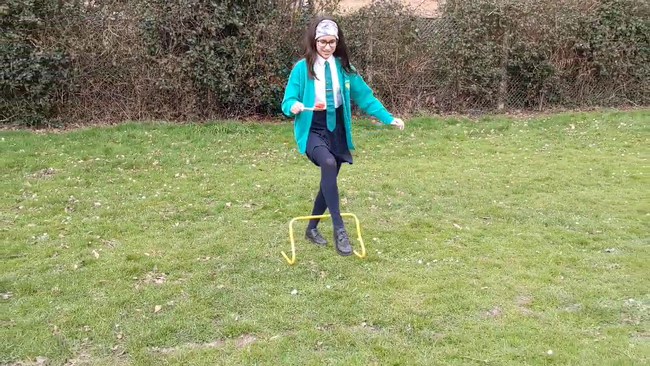 Muscliff had two teams compete against Park School in netball. One team won by a significant margin and the other fought a close match, eventually winning 4-2. Congratulations to Sophia and Ali who were voted by their opponents as player of the match!

Year 5 took part in a football and a netball tournament hosted by Bournemouth Collegiate School. This was the first time the netball team had played a competitive match together. They did Muscliff proud displaying wonderful sportsmanship.

The official results are yet to come in but we are keen to share that Team Muscliff were out in force over the weekend at the Bournemouth Schools Swimming Gala. All the children were amazing with plenty of top 3 finishes.

As the Olympic flame goes out in Beijing this weekend, let’s take a look at the best bits you may have missed from the last 2 weeks... 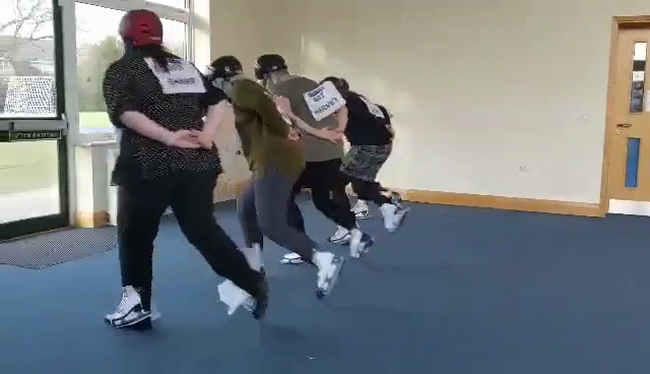 Mrs Flynn took a Year 5 team to Ferndown Middle for a football festival with other schools. The mixed team performed well and worked together.

There was a HUGE result for the netball team in the Bournemouth Schools Tournament as they finished in 3rd place out of 18 schools! Everyone watching was super proud of the effort and determination the Muscliff girls put in, and to come away third was the cherry on the cake! 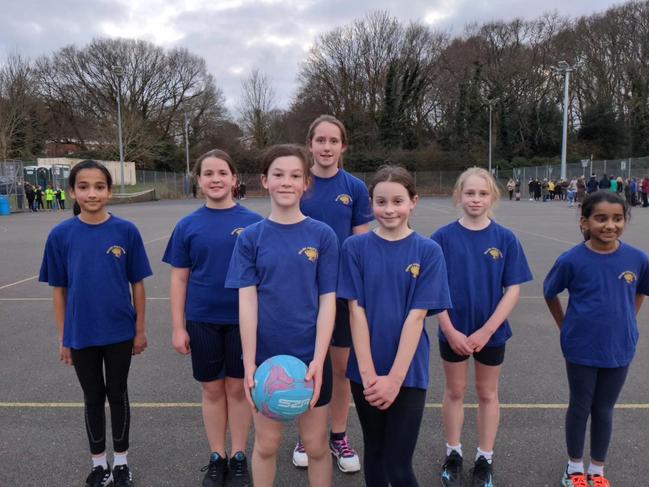 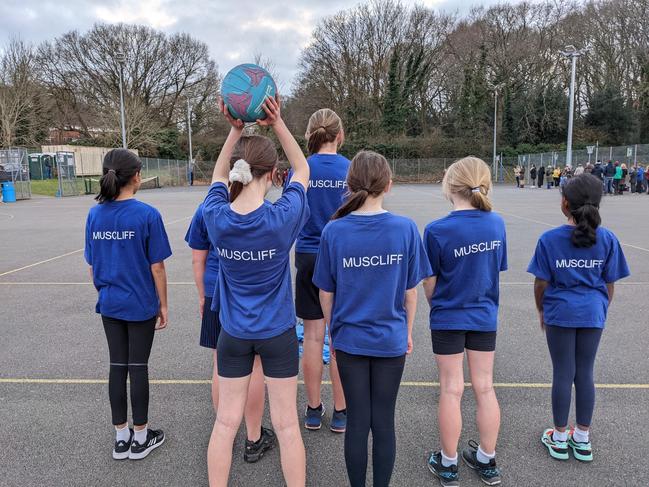 Muscliff's Year 3/4 team went to Littledown to take part in a football event supported by AFC Bournemouth Community Sports Trust. They had fun, played well AND brought back the winners' trophy!

The netball team put all their skills into action in a closely fought (and cold) friendly against St Katharine's, with Muscliff just losing out 7-9. Coaches and spectators were impressed not only by the level of skill and teamwork on display, but by the manner in which the match was played. Well done team!

In glorious sunshine, Muscliff was extremely proud of the Year 5/6 team who attended a football event at Littledown supported by AFC Bournemouth Community Sports Trust. The team gave 100% and played with smiles on their faces!

A squad of 18 children from Years 5 and 6 competed in an indoor athletics event at Avonbourne Academy. With several children unfortunately having to isolate, other members of the team stepped up to compete in events in which they hadn't anticipated, which made 3rd place even more rewarding! A special shout out must go to the girls 4 by 1 lap relay team - a fine performance! 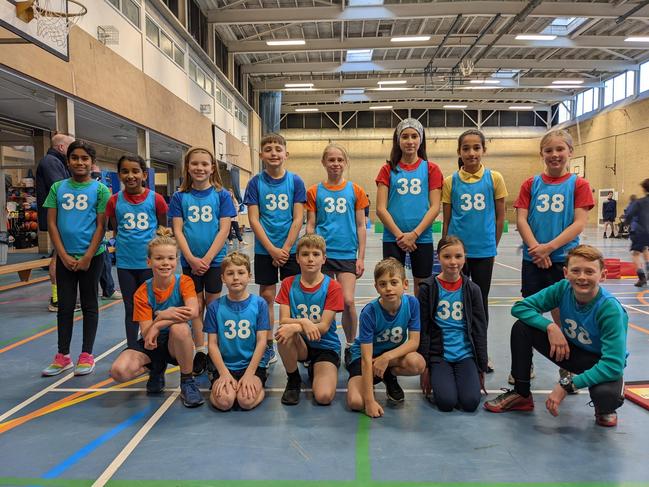 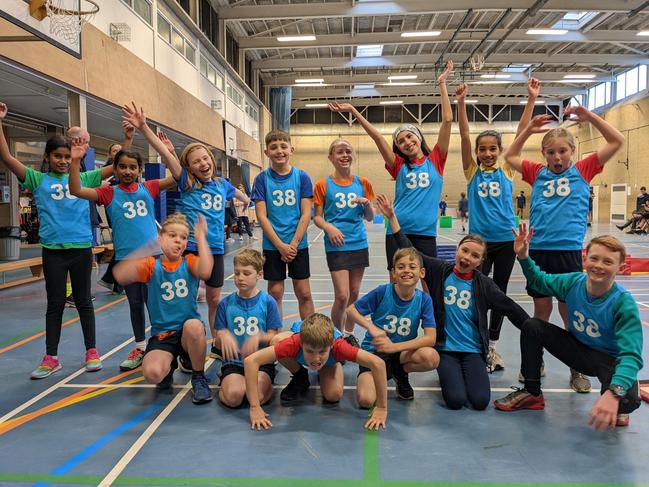 In the second match of the netball league, Muscliff faced local rivals, Epiphany. Muscliff stormed to victory showing their excellent teamwork and passing, winning with a massive score of 15-1!

Two Year 5/6 teams took part in a mixed relay event at Littledown. With tough competition, it was great to see both teams finish comfortably in the top half of the table. Well done to all children for braving the cold and dark! 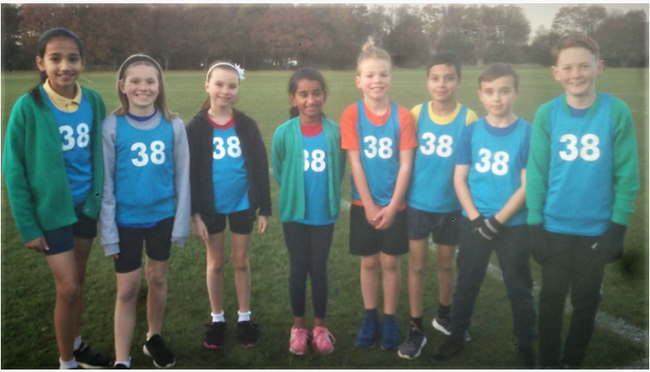 Muscliff was represented in the Bournemouth schools 'newcomers' football tournament at Littledown where they came 4th out of 16 teams. Mr White was extremely proud of the team's fair play and consideration for each other as well as other teams. A great result topped off a wonderful afternoon of football. Well done!

Muscliff hosted Moordown St John's in their first match in the local netball league. Muscliff played extremely well as a team showing all the skills they've been practising in training. Coming away with a convincing win was the perfect start to the league fixtures. Well done team!

The first of the girls football league fixtures saw Muscliff face Epiphany away. In what was a tight and competitive game, it was Epiphany who edged the win 4-2. The match was played in good spirit with many smiley faces on both sides! Well done girls!

Mr Barton took a Year 5 football team to compete in the Bournemouth schools tournament. He was particularly pleased with the team's tenacious attitude and resilience shown throughout the afternoon. They did Muscliff proud!

A match report by Mrs Flynn and Miss Cole:

In November, the girls' football team were able to take part in their first football tournament at the Littledown Centre. They were placed in a group against Park School, Corpus Christi and St Micahel's. Despite initial nerves, the girls won their first game against Park with an easy goal which settled them and gave them confidence to then go on to beat Corpus Christi 8-0 and secure a last-minute win against St Michael's as well. This made them the winners of their group and placed them in the top four schools out of 17 for the final group games. Being in the top 4 put us up against the strongest sides in the area: St Walburga's, St Katherine's and St Peter's. The girls really stepped up their game and held their own against St Katherine's, with excellent defensive playing securing a 0-0 draw.  They moved onto the next game with St Walburga's with the same great attitude and fighting spirit. Unfortunately, St Walburga's gained the upper hand in the second half and Muscliff conceded the first defeat of the day. The last game, against St Peter's, was very well matched and the girls battled back from being 1-0 down with a great goal just before the final whistle ensuring a 1-1 draw. As you can imagine, the crowd went wild and the girls finished their afternoon ecstatic. The girls finished 3rd overall out of 17 teams, the Mighty Muscliff strike again! Miss Cole and Mrs Flynn would like to say a massive well done to all the girls who took part, they should be incredibly proud of themselves. We would also like to say thank you to all the parents who helped with transport and cheered the girls on! Looking forward to the next one! 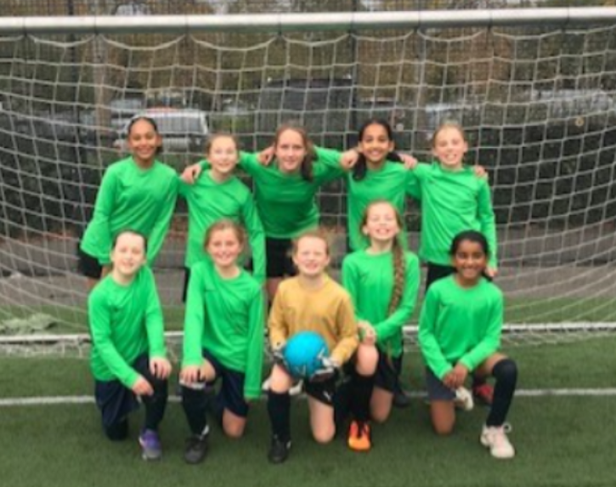 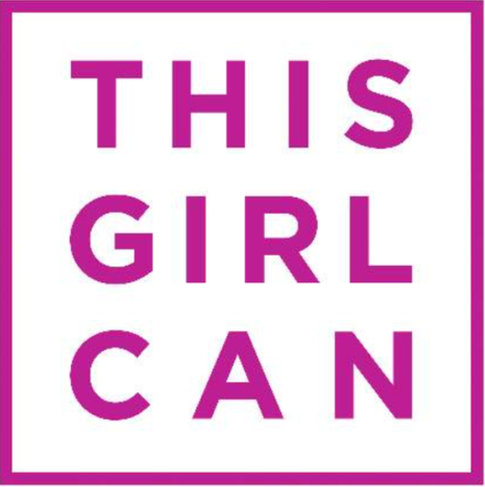 Muscliff was represented by 30 children across Years 4-6 in an individual cross country event at Sir David English. Two stand out performances came from Naomi and Dhwani who finished 4th and 8th respectively out of all the Year 5 girls in Bournemouth!

Well done to all the Year 6 children who took part in the Bournemouth schools football tournament. It is always good to see Muscliff children representing the school and enjoying themselves on the sports field. Well done!

In the first netball fixtures of the academic year, Muscliff travelled to Bournemouth Collegiate School to compete in a tournament. The team won 3 matches, drew 1 and lost 1 placing them 3rd overall. With 4 Muscliff children having never played a competitive match before, they were rightly very proud of their achievements. Go Team Muscliff!

After a long 18 months with very few inter-school competitions, Bournemouth Collegiate School hosted the first football tournament of the year. Needless to say, the Year 6 children couldn't wait to go and represent Muscliff in the event. Well done boys!