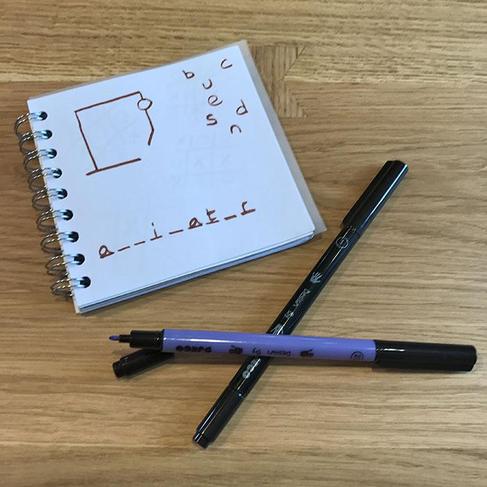 Keep engaged with fun and simple games that only require paper and pencil (or a couple of coloured pens). These games will challenge you and keep you entertained for hours.

To play Dots, you need a square of dots on the page (start with 6×6). Once the square is created, players (2 or more) take turns with a different colour pen creating line segments between dots. When a player forms a square with their line, they may put their initial in that square and play again. The game continues until all the lines between the dots have been drawn.

The simple game of tic tac toe is a two player game of Xs and Os. Play begins with nine spaces on a paper created by crossing two perpendicular sets of two parallel lines. One player begins (take turns being the first player) by placing an X in one square. The next player draws an O in another square. The game continues until there are three Xs or Os in a row or all squares are filled–a draw game, also called cat’s.

Players secretly write down words on pieces of paper and fold them up. The first chosen artist randomly picks a word then must draw and get the others to guess the word without talking or drawing letters or symbols. Once guessed correctly, a new artists is picked. Variation: write books, characters/celebrities or films.

Close your eyes and draw a picture. Choose something simple, such as a house, tree, or stick figure person.

Choose a category of something that is simple to draw and see how many variations you can create. Examples are leaves, decorated balls or boxes, circles with designs, hearts or flowers.

No need for a store-bought version of this fun game. Simply draw ten lines horizontally and vertically to create twenty squares. Then take turns drawing circles in an attempt to get four in a row. Once the bottom row is filled, players must “drop” the circles on top of another. Players can either mark the circles with their initials or use X and O. The first to get four in a row wins.

Create your own board game