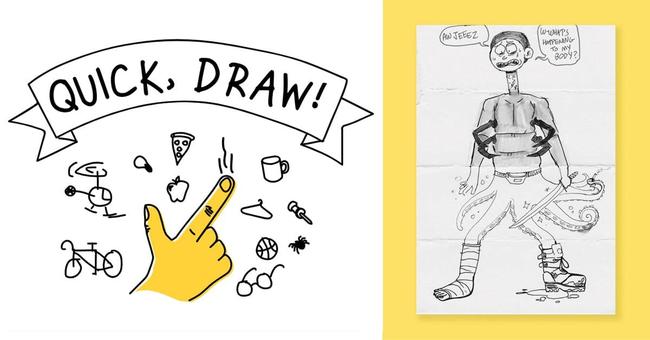 Player 1 thinks of a word, a title of something, or a saying. They then draw dashes to represent each letter of the word(s). The other person then tries to guess what letters are in it. If they guess correctly player 1 writes the letter on the corresponding dash. To win player 2 must guess the missing word(s) before the hanged man is completed.

A firm favourite pen and paper game for a lot of families. My charges have been playing this game since they were about 4 and 5.

Now this is my favourite pen and paper game! I have been playing this one since I was about 6 and I have always been really good at it.

Each player takes it in turns to draw 1 line between two adjacent dots. Lines can either be horizontal or vertical, NOT diagonal.

The aim of the game is to make as many boxes as possible, without letting the other player get them. If you managed to complete the 4th side to a box then add your initial on the inside.

The winner is the person with most initialled boxes.

Each player begins by drawing a head in the top 3rd of a piece of paper without letting the other players see.

When they are done, fold the head over so that just the neck part is showing.

Pass the piece of paper to another person who then draws the body. Once that is completed fold it over again so that just the top of the legs are showing.

Pass it on again so that the next person can draw the legs.

Once everyone is finished you can reveal your finished work of art. 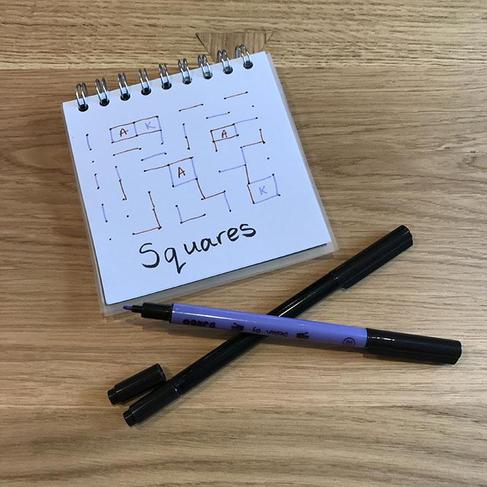 Keep engaged with fun and simple games that only require paper and pencil (or a couple of coloured pens). These games will challenge you and keep you entertained for hours.

Remember the time it took to form an array of dots across the page? To play Dots, you need a square of dots on the page (start with 6×6 and challenge your kids to go up to 30×30 or more). Once the square is created, players (2 or more) take turns with a different color pen creating line segments between dots. When a player forms a square with their line, they may put their initial in that square and play again. The game continues until all the lines between the dots have been drawn.

The simple game of tic tac toe is a two player game of Xs and Os. Play begins with nine spaces on a paper created by crossing two perpendicular sets of two parallel lines. One player begins (take turns being the first player) by placing an X in one square. The next player draws an O in another square. The game continues until there are three Xs or Os in a row or all squares are filled–a draw game, also called cat’s.

Draw six dots in a hexagon. Two players take turns drawing line segments between each dot in their own color pen. The object of the game is to avoid drawing a triangle in your color pen.

Players secretly write down common phrases on pieces of paper and fold them up. The first chosen artist randomly picks a phrase then must draw and get the others to guess the phrase without talking or drawing letters or symbols. Once guessed correctly, a new artists is picked. Variation: instead of common phrases, write books, characters/celebrities or films.

Three or more people each begin with a piece of paper. At the top of the page, they all draw a picture and pass the paper to the next player. With this new piece of paper, each person writes a caption sentence below the picture then folds the top of the paper over so only the sentence can be seen. This piece of paper is then passed to the next player who will draw a picture to go along with the sentence. Each player again folds the paper, now so only the picture can be seen and passes it along. The game continues until there is no more room and every player can open up the paper and be amused!

Close your eyes and draw a picture. Choose something simple, such as a house, tree, or stick figure person. Those watching may think you are praying, meditating, or in deep concentration. All the while you are attempting to draw a familiar object from memory without looking at the paper.

Choose a category of something that is simple to draw and see how many variations you can create. Examples are leaves, decorated balls or boxes, circles with designs, hearts, flowers, or drink glasses.

Even though we live in a technological world, there are times when one can use a pen and pencil game to have fun in a group. The following two games work well at parties and as icebreakers in classrooms and offices. Although they are challenging, older children will enjoy them also.

Two or more players will enjoy this simple yet challenging game. Each player begins by drawing a four space by four space square on a piece of paper and hiding it from the other player(s). The players take turns calling out a letter. As each letter is called out, players must write the letter somewhere on their grid. The goal is to make as many four-letter words as possible. Called out letters may be repeated. When all of the grids are full, players disclose their grids and count how many four-letter words they were able to create vertically, horizontally, and diagonally. The player with the most wins the game.

You will need three or more people to play this pen and paper game also known as “Gossip!” Begin with a standard 8 ½ x 11-inch sheet of paper for each player. Everyone draws a picture at the top of the paper and passes the paper to their left. Then each player captions the picture and folds it so only the sentence shows. The papers are passed again and the next player draws a picture to fit the sentence. This continues until the paper is full. The papers are unfolded to see a funny story. If you wish, you may begin by folding the papers into four or more sections – one for each player.

Pen and paper games are perfect for two players and there are many two-player games out there. Very young children begin with Tic-Tac-Toe and move to more challenging games. Students become secretive proficient players when bored in class. Some of the following games provide a challenge to even the most sophisticated players.

Probably the first and easiest pen and paper game learned by a child is Tic-Tac-Toe. Grids of two vertical and two horizontal lines are filled with either an X or O as players take turns. The goal is to have three marks in a row – horizontally, vertically, or diagonally – before your opponent. The player who goes first can have the advantage. Two experienced players often end the game in a draw. Tic-Tac-Toe teaches good sportsmanship and beginning reasoning to young children.

You need two different colors to play this two-player game, but we have included it here as it is so much fun. Draw six dots in a hexagon (a six-sided geometric shape). Take turns drawing lines between each dot. You can either use two different colored pens or a pen and a pencil. The object is to avoid making a triangle. The first person whose line completes a triangle loses this game.

Begin with a grid of dots drawn on a piece of paper. You can choose what size grid you wish to use. A six-by-six grid works well for younger children. More advanced players may wish to draw a much larger grid. Two or more players take turns with different colored pens or pencils drawing lines between dots. The goal is to complete a box while preventing the other player from doing so. When a block is completed by a player, they write their initials inside and draw another line. When all of the dots are connected, the person with the most completed blocks wins.

The last player able to draw a line wins the game.

You may know this as a boxed strategy game, but it is easily played with pen and paper. Players begin by drawing two grids with ten vertical and ten horizontal lines on two separate sheets of paper. The horizontal side is lettered and the vertical side numbered. On one sheet, each player draws rectangles representing a fleet of ships without letting the other player see their location. On the other grid, hits are marked with an X and misses with an O. The ships must take adjacent squares vertically, horizontally, or diagonally. Each player’s fleet consists of the following:

Players take turns firing a salvo of seven shots, calling out guessed locations of the other player’s ships, example F6, G9, etc. An opponent must state the number of hits and the type of ship, but not which shots were hits and which misses. Once all the squares of a ship are discovered, a player must say, “You sank my battleship (cruiser, destroyer, etc.).” Each time a player loses a ship, the salvo is reduced by one shot. The goal is to sink all of an opponent’s ships to win the game.

If you wish, you can play with the optional rule that no two ships can touch.

An expert player of this simple word pen and paper game knows how to stump their opponent with repeated letter words and short words. One player draws gallows with an empty rope and blanks for each letter of a word below it, leaving space to complete the drawing of a hanged man. The other player guesses each missing letter of the word with each incorrect guess resulting in another part of the hanging man’s body – head, torso, two arms and two legs. If the player guesses the word before the hangman is completed, they win. If not, the player who chose the word wins.

No need for a store-bought version of this fun game. Simply draw ten lines horizontally and vertically to create twenty squares. Then take turns drawing circles in an attempt to get four in a row. Once the bottom row is filled, players must “drop” their circles on top of another. Players can either mark the circles with their initials or use X and O. The first to get four in a row wins.

SOS is played on a grid of squares of any size, usually 3 x 3. Two players attempt to label sequential squares either vertically, horizontally, or diagonally with SOS. Once a player succeeds, they take another turn and continue until they cannot create any more. Players may play either an S or an O on their turn. To differentiate between players, one player circles their letters, and the other places a line through theirs. (They can also use different colored pens.) If neither player gets a SOS, the game is a draw.

Pencil-or-pen and paper games provide a quick and easy solution to the complaint, “I’m bored!” These games can be played anytime and anywhere. So, grab a pen or pencil and challenge a friend or teach your child strategic thinking with our collection of fun games.